The Question Man:
What do you think the town needs in 2012?
(Asked at the Green Salmon,
Yachats Underground Pub & Grub, and elsewhere.)
John May: Higher tides. Bigger salmon runs. More meteorite showers. More eagle sightings. And more tourists, spending money.
Valeria: The town needs a yarn shop, it needs a pet shop, and it could use a Christmas shop!
Gretchen Armstrong:  The City of Yachats Public Library should be open more hours of the day, and preferably seven days a week, including Sunday afternoons.
Dennis McSharry: I would propose renaming the town from Yachats to Ya-Cools.
Donna Hirschman:  I believe the town needs some new businesses to come into town to help our economy, because we’ve lost so many business here recently, from people retiring and that sort of thing.
Jerome Garger: In 2012, I think that the town needs a no-burning ordinance. A lot of people in town are affected by trash and yard clippings that are burned. I think it’s injurious to their health, and I think it’s time that we stop doing that.
Mari Irvin: What I think the town needs in 2012 is that every shop that is closed now should have a new occupant, so that there are new shops everywhere, and there won’t be one single building vacant.
Judith: Besides a new infusion of tourists...  I would love to see all the telephone poles and telephone wires buried, but it’s not going to be a possibility in 2012.... I would like to see all the storefronts occupied.
Greg Scott: We need a solution to street financing. It’s the biggest problem right now. It’s driving the agenda for almost everything else we want to do.
TYG: What is street financing?
Greg Scott: It has to do with how we pay for paving—when streets wear out and they need to be repaved.
Gerald Stanley: I think the town could use at least one more restaurant—maybe get a Mexican restaurant back, or maybe a Chinese restaurant. Maybe a bakery—I know we have lots of homemade breads and pastries, but maybe a bakery where you could get things like cupcakes.
Joanne Kittel: I think this town needs more cooperation among the leaders, and I would like to see more community involvement in volunteer work than there has been, because it seems to be always the same people doing most of the volunteering. I would like to see more support in the community than we already have had for our children and our disabled people. I would like to see this community have more support for our environment and the surrounding town.
Judy Goats: More peace and love!
Dave Lothrop: I’m not sure it’s what the town needs, I think it’s what on a bigger level we need—it’s more jobs and a better economy. And that’ll help the town.
Jeremy Holcomb (visiting from Bremerton, WA): Maybe a couple of restaurants or quick stops—there were only a couple of places open driving through, though it is December, so I guess it’s understandable.
[...] Maybe a standard park informational center off the side of the road, so you could figure out if there are some hiking areas around here.
Linda Wilson: I think our town needs a dry cleaner, and a car wash.
Dave Wilson: The town needs friends. The town needs people who care about each other. The town needs a lot more American flags!
Sue Keys: I think it takes us all to work together so everybody’s promoting their business and how fabulous this area is—whether it’s government or businesses together.
Matthew Buonaiuto: A sushi bar! That, or more affordable housing for young people.
Tony Regules: We need more people coming to the town, and we need more jobs here.

YACHATS AGATE FESTIVAL
The Yachats Gazette spoke with Donna Hirschman,
Manager of Planet Yachats.
TYG: What’s going on with the Agate Festival?
Donna: We’re so excited about the Agate Festival! This is our first ever! So far we have got around 20 vendors that are coming to town everywhere from Brookings, to Tillamook, and also people from the valley. Our main speaker is Mr. Chatters. He is an archaeologist as well as a paleontologist. He will be giving some lectures. We also have people coming, like from Delta One in Waldport, that are going to give demonstrations on how to facet jewelry. There will be other demonstrations including a geode-cutting machine. Also, we’re going to have the Fire Department here to talk about beach safety. There is no charge to go to the Agate Festival. There will be a sandbox there where children can go in and find agates....
TYG: Hmmm!
Donna: ... so we’re really looking forward to this.
The Yachats Agate Festival, sponsored by the Yachats Chamber of Commerce,  will be held January 21-22, 10:00 am to 4:00 pm, at the Yachats Commons (Highway 101 at W. 4th Street).
Some special events for New Year’s in Yachats
Robert Anthony, Luna Sea Fish House: We’ll be open the usual hours. We’ve got fresh crab dinners, and I’ll be breaking out some of the Captain’s Reserve stash of smoked salmon!
Michelle Bursey, Ona Restaurant & Lounge: We’ll have a complete special menu including duck breast, Moroccan lamb shank, and a certified Angus tenderloin Oscar.... Afterwards we’re having the band Speaker Wave. Our theme for the year is “The stars are out for 2012.”
Dave Lothrop, Yachats Underground Pub & Grub: At our piano bar we’ll have Kirby Jones, who’s been doing it for 45 years. Also, we did a Christmas special hot buttered rum, and we’re going to repeat that on New Year’s.
Sue Keys, The Adobe Resort: On New Year’s Eve we have a special menu in the dining room including smoked pork osso buco, lobster tail, and Dungeness crab stuffed colossal prawns. Back by popular demand is Inoke Baravilala, who was here last year, and everyone was jumping up and down and dancing and having a great time. He will be here on the 30th and 31st, and there is no cover charge in our lounge. And then we will be serving our traditional New Year’s Day brunch.
Gretchen Hetzler, The Drift Inn: We will be open until 9 or so with both steak and seafood specials that come with champagne. Music will be the Satori Bob duo from Eugene.
We at The Yachats Gazette thank you for your faithful readership, and wish you the very best for the New Year!
Posted by Heather T. at 5:54 PM 2 comments: 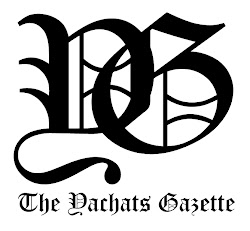 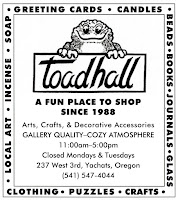 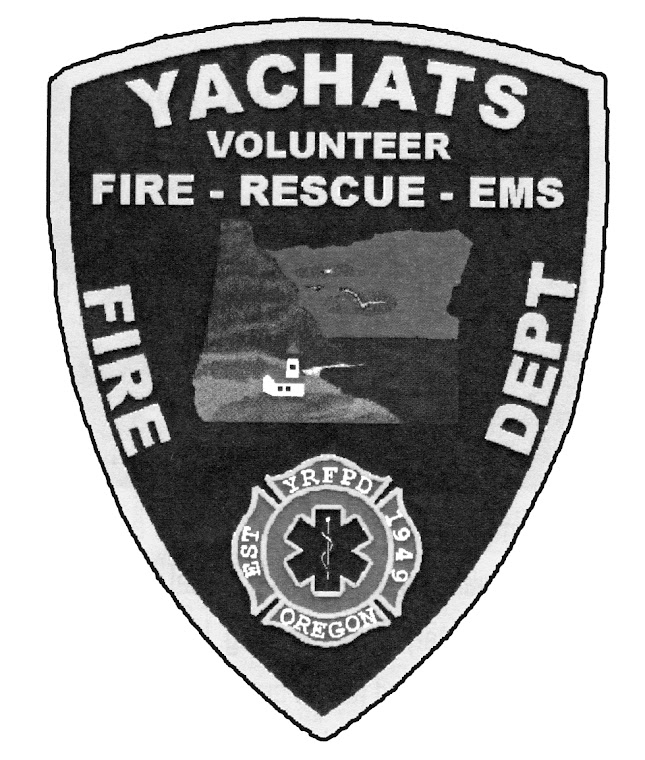 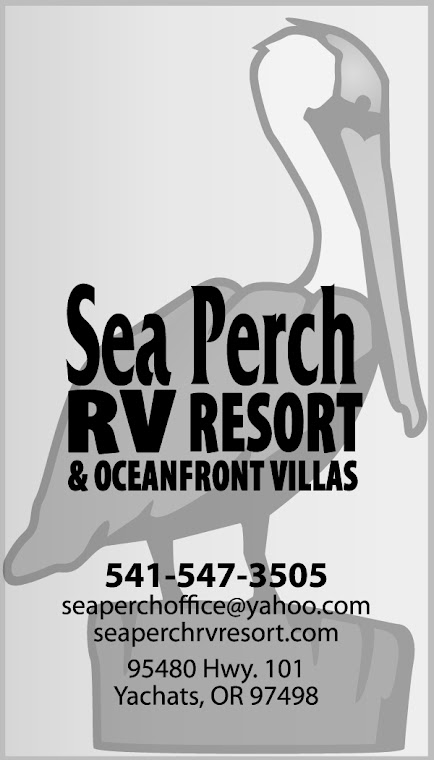 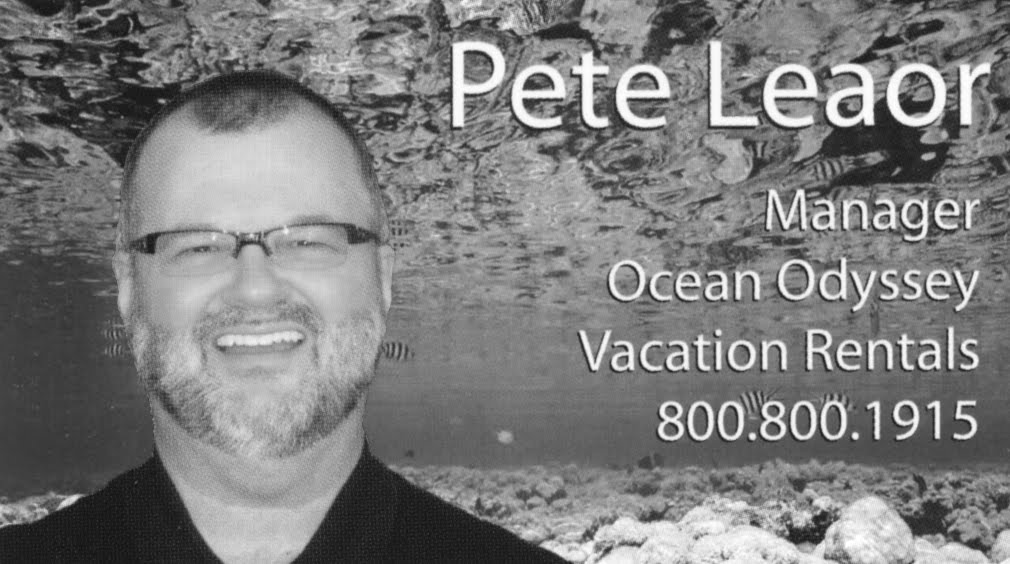 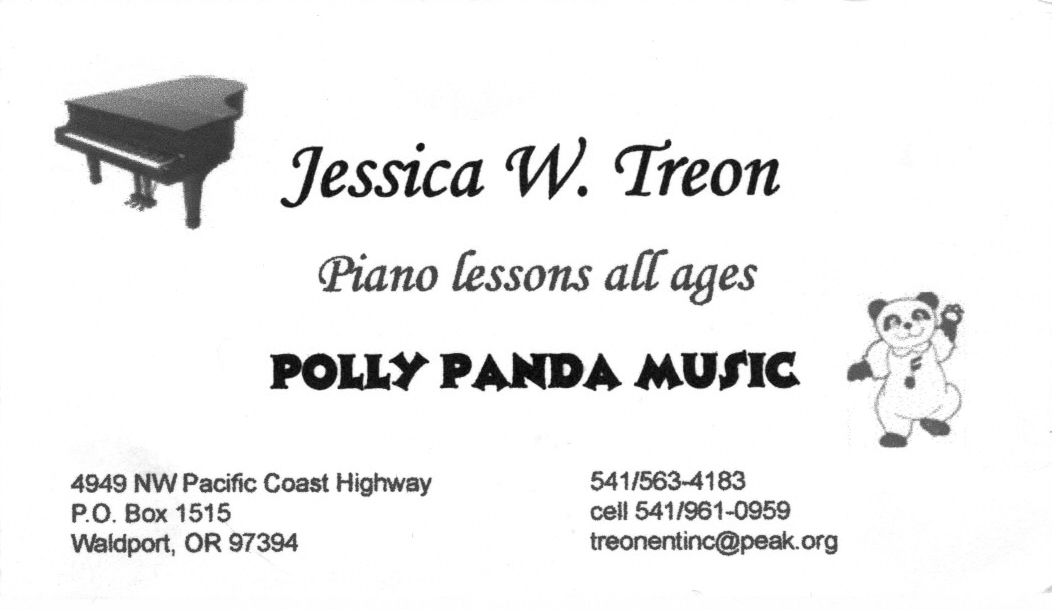 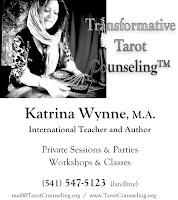 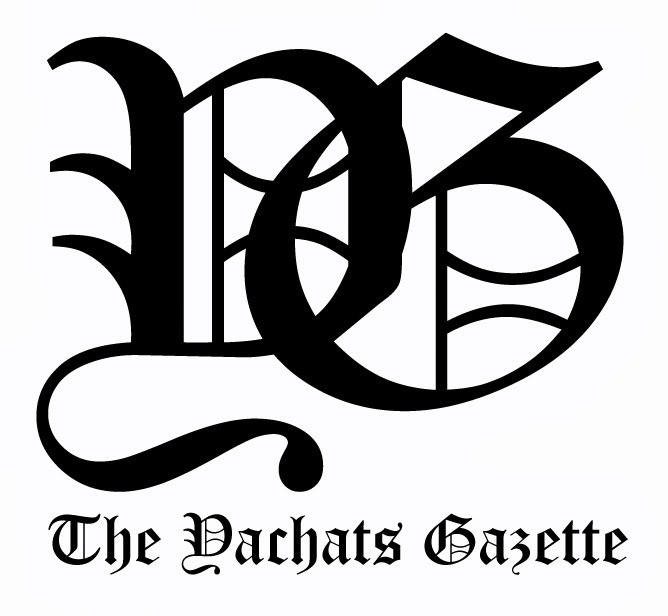